Here’s a list of my personal favorite game controllers.

Nintendo was known for bizarre game controllers around this time.  Unlike the N64 controller, the Gamecube one actually benefits from its weirdness.  The face button layout is unlike anything is seen before or since, but for certain games, this layout works better than the standard 4 button cross arrangement.  You have a big chunky A button for the thumb’s neutral position, and you can roll off it to easily hit any of the others.  You never have to worry about being confused about whether A or B is confirmed or cancel, every Gamecube game (that I’m aware of) adhered to the green button being confirmed and the red button being canceled.  Games that require a lot of multiple face button presses benefit from this arrangement, which is why I think this is still a highly preferred choice for Smash Brothers to this day.

The analog stick quality is just about as good as any I’ve ever used.  The texturing on the control stick minimizes slipping and the octagonal plastic surrounding the stick is a really smart idea that I wish was still used in modern controllers.  If you press up you know you’re going exactly up and not veering off slightly in a different direction.  I’m sure I’m not alone in saying that sometimes it’s fun to just idly swirl the joysticks around during a loading screen because there’s something oddly satisfying about how it feels by Mike Matei.

A big complaint was the small d-pad offset below the analog stick, but I’ve never had an issue with it.  If the size and placement really are the issues, you can’t blame the quality of the actual component.  It’s accurate and solid and has a nice texture that minimizes thumb slipping.

The top of the controller is where I start to take issue.  The analog shoulder doesn’t feel quite right because they need to be depressed straight down instead of rotating into the controller like modern controllers do.  They click when you depress them all the way, which some games took advantage of, but requires a bit of extra force than you would likely want.  The Z button is oddly positioned and needs to be pressed in a specific fashion in order to get it to fire.  I have no idea why they didn’t put an additional bumper on the left side of the controller when there was space for it and an extra button could have been helpful for the console.

The Gamecube controller differs wildly from the convention in a way that makes it fun to use.  I overlook the flaws in favor of its strengths, and I wish some of the better aspects of the design would show up in future controllers. 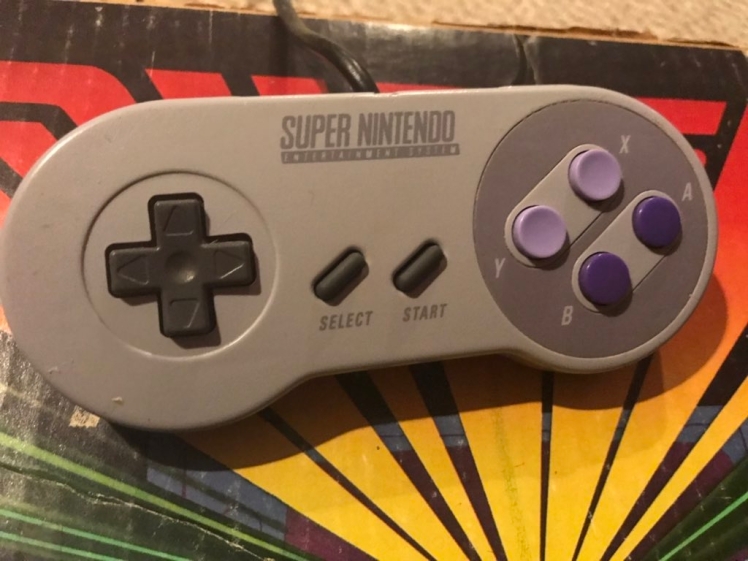 The SNES controller was a very good early attempt at shaping a controller to fit human hands comfortably.  It builds upon the phenomenal design of the NES pad and adds more buttons, and curved the edges for additional comfort.

I miss the old days when Nintendo was more conservative with their controller upgrades with each generation.  Here we have a good followup to the previous design that doesn’t add insane stuff like multiple controller grips, analog shoulder buttons, crap you have to wave around and crap you have to plug into other crap.  Nobody liked having a Wiimote sitting in their lap with a Classic Controller plugged into it, it’s just something everyone had to put up with at the time.

One big improvement that the SNES generation added was the concept of rolling your thumb upwards in games that require a simultaneous button pressing.  You can use the joint of your thumb to use B to jump and the tip of your thumb to hit Y to attack.  This was a clear advantage over this controller’s main competitor, the Sega Genesis gamepad.

Shoulder buttons were a great addition, although they are in somewhat of an unnatural spot and don’t conform exactly to the natural position your index fingers want to rest when holding a controller, something that modern controllers do a lot better.  If you’re right-handed, the L button going to be your least favorite button on the controller to press.

This one tends to make creaking noises during intense game sessions, but it’s very durable and reliable overall.

This one is more of a personal preference.  I just really like how this one feels, and it always works well for me.  I’ve favored this controller over recent years because of how reliable it is, even though there’s nothing particularly special about it, apart from how awesome it looks.  The turbo switches are pretty superfluous, but they don’t get in the way.  It’s solid, it feels nice, and it’s reliable. For me, the D-Pad functions perfectly every time, as do the buttons. It’s a controller I have literally zero complaints with. 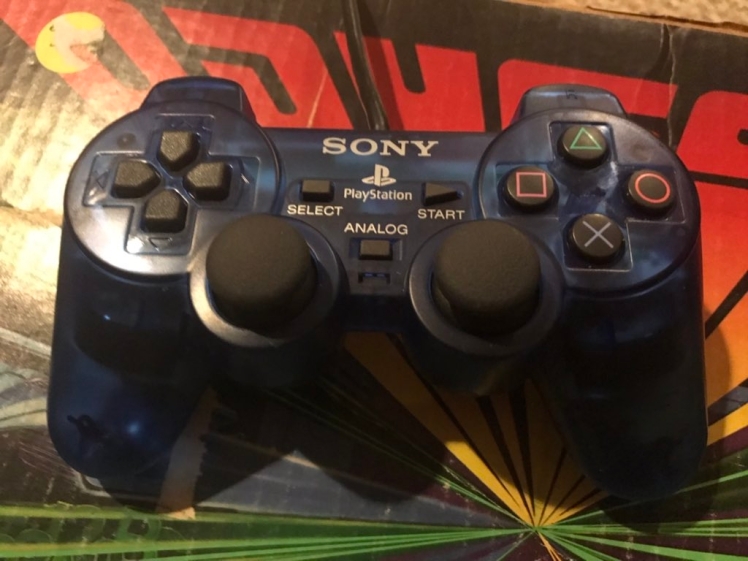 Sony did themselves a big favor by designing an excellent controller to compete with Nintendo when they were first starting out.  If this one is your personal favorite, I’m not going to argue with you.  The DualShock 1 and DualShock 2 are pretty similar with a couple of minor differences, and it’s hard to find yourself wanting for anything else in a game controller.  These controllers are so close to perfection that every iteration of DualShock onwards just got weirder and weirder instead of better.

The D-pad will never let you down.  No erroneous inputs, no thumb slipping.  Nintendo and Sony offer the best D-pads, and they’re pretty much tied for 1st as far as I’m concerned.  You can always depend on this D-pad to correctly read your intended inputs.

I’ve always been fond of the aesthetic choices.  Sony obviously wanted to break away from Nintendo’s established ABXY face button labeling scheme, and they came up with a really simple and pleasing set of colored basic shapes that were well used in their advertisements and promotional materials.  They’ve become synonymous with the PlayStation brand and it’s always been elegant and fun.  I’ve always liked how the shapes of the start and select button are reminiscent of the Stop and Play buttons on a VCR/CD Player/etc.

I prefer these over the DualShock 3 because the analog L2 and R2 buttons feel terrible on that controller.  Analog triggers rarely are required to play a game, they feel springy and gross, and they wear out quickly.  I like a good solid digital trigger that doesn’t require a lot of pressure to activate.

The analog sticks are unfortunately where this controller falls short of perfection.  They aren’t terrible, but they could have been textured a bit better to reduce slipping.  I prefer the octagonal plastic around analog sticks like what the GameCube controller has.  Depressing the sticks to get the L3 and R3 functions feels strange when the stick isn’t in the neutral position, but it still works.  And unfortunately, these sticks can wear out over time and become unusable.

When all else fails, the DualShock always works as a fallback, and the design is more focused on function and reliability than flashy gimmicks.

This is the controller that saved the gaming industry.  There was no way to continue the trend of crappy uncomfortable joysticks that were ubiquitous before this time, and it had come to the point where customers needed a proper tool to play home consoles in order for the art form to move forward.

For intents and purposes, this was the first truly good controller for a home console, and the design still holds up more than 30 years later.  Nintendo (specifically, Gunpei Yokoi) invented the cross style d-pad, and it’s one of the most important innovations in all of gaming.  For the first time, the controller itself was no longer an obstacle, and games could be a contest between the player and the game’s challenge instead of fighting with a controller that isn’t comfortable, accurate or responsive.  After this controller was brought into the world, game design was off and running.

Sure, other controllers have more buttons and analog sticks, but those are innovations are dependent on the type of game being played, and don’t make a controller better in a universal sense.  If a game only needs a d-pad and a small number of buttons, this is the best controller to use.

The build quality is top notch.  It remains fully functional after years of use and doesn’t break when it gets thrown at a wall.  It’s also a design that will never become obsolete, because of its simplicity.  No matter how advanced games get, there will always be games made that don’t require anything more than a d-pad, two face buttons, and two function buttons.  And this controller does everything it sets out to do at the highest level of quality and accuracy.

I will always favor games that let me use the NES controller because it’s the game controller I want to use the most.

An arcade stick doesn’t get a spot on the numerical list because it’s more of a concept than a specific design or model I can point to.  There’s a lot of different types of arcade stick setups, probably more than you can count.  Different manufacturers make different joysticks, buttons and full units, and each has their own feel that people have different preferences for.

It’s no surprise that many professional competitive game players use joysticks.  D-pads are great, but even the best ones don’t quite give you the precise level of control over diagonal directions that a well-made joystick can.  You can feel the click of the gates inside the mechanism that let you know exactly which direction you’re moving in.  And for games that require rapid button presses, hitting a large button on a flat surface is superior to your thumb.  This becomes obvious when you think of how lots of people tend to switch to their index finger or middle finger away from the thumb on a handheld controller during minigames or other segments that require the player to push a button as fast as possible.

I like using them, but it’s unrealistic for me while doing videos and live streams. Mainly because of the button tapping being harsh on the ears.

The problem with arcade sticks is they’re a muscle memory investment.  You do need to relearn how to play your favorite games with an arcade stick and you will likely suck at first.  Although, it’s not all bad because arcade sticks are inherently fun to use, so that process of practice isn’t entirely sacrificed.

I would encourage anyone who is into retro or retro-style games to look into purchasing an arcade stick, you might discover it breathes new life into the experience of playing games.  It’s very easy to make the case for the switch if you play bullet hell shooters or fighting games, but other genres can benefit from them as well.

5 thoughts on “My Favorite Game Controllers”